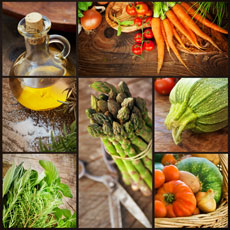 Traditional Mediterranean diets had olive oil as their principal component of fat, were high in cereal products, legumes, fruit and vegetables, moderate in fish and low in dairy and meat products. Moderate amounts of wine were taken with meals. The traditional Mediterranean diets were nutritionally adequate with a varying amounts of total fat, low in saturated fat and very low in trans fat, rich in fiber and in antioxidant vitamins or flavonoids.

Mediterranean diets in the the Seven Countries Study in the 1960s