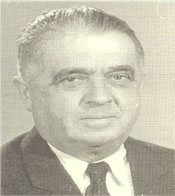 The former Yugoslavia also contributed a Serbian branch to the Seven Countries Study. As one of the senior members of the Serbian team, Bozidar Djordjevic (1910 – 1986) ran operations from headquarters like a benevolent general.

By the time the Seven Countries Study began, Djordjevic was already full professor at the University of Belgrade, the place where his career started with his graduation in 1934. In fact, the only time he spend outside of Belgrade was in the late 1940’s when he was in Paris receiving training in cardiology.

Djordjevic was closely linked to the Tito administration through his high position at the Belgrade University. Because of this position he was able to facilitate the field operations and provide an effective staff for the surveys in Serbia.

He was also awarded the Serbian National Day Award “Seventh of July” for his contribution to science and health promotion in Serbia.

Djordjevic was member of the Serbian Academy of Science and Arts (1963-1986).