In the 1960s the SCS determined fatty acids in duplicates of the foods eaten at home among samples of the 16 cohorts. The statistical analyses of the SCS started simply with investigating the associations among average saturated fat intake, average serum cholesterol levels and coronary heart disease (CHD) incidence rates in the cohorts.

The historic correlations among saturated fat, serum cholesterol and CHD in the Seven Countries Study

Already in 1970 at the five-year follow-up, the SCS showed strong associations among the average saturated fat intake, average serum cholesterol level and CHD mortality rates of the cohorts (population level, cohort level, or ‘ecological relationships’). Though causal conclusions for individuals could not be drawn from these results, these correlations are most valuable in estimating the potential of population prevention, while the totality of the evidence, including results from prospective cohort studies and randomized trials, is needed to draw conclusions about causality and prevention in individuals.

Cross-cultural correlations after 25 and 50 years follow-up

The cross-cultural associations were repeated using 25-year and 50-year CHD mortality data for serum cholesterol and saturated fat intake and later extended with associations on carbohydrates, flavonoids, and dietary patterns.

Read more about these later associations.

What do the graphs show?

How to read the graphs

These graphs show linear relationships between two parameters. Some are clear and steep, others are less pronounced. These graphs should not be seen as ‘X causes Y’ depictions, but rather as ‘in groups with X, also Y is observed’. 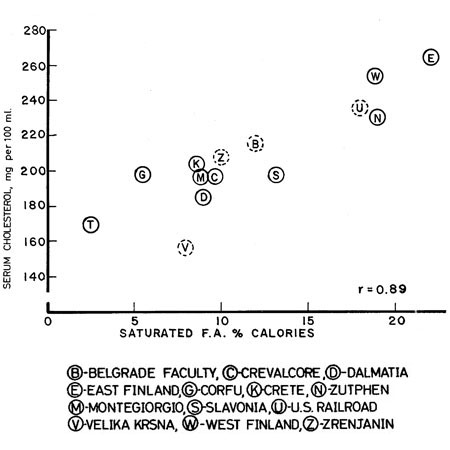 A) Saturated fat and serum cholesterol 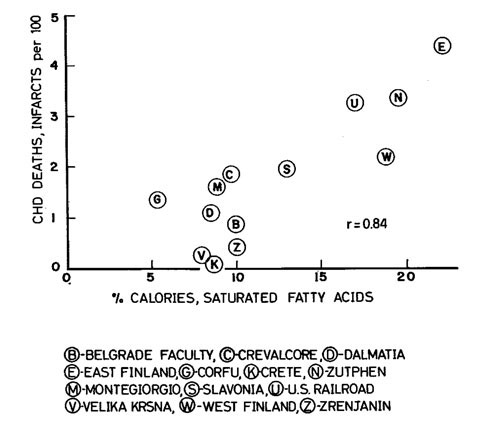 B) Saturated fat and CHD incidence 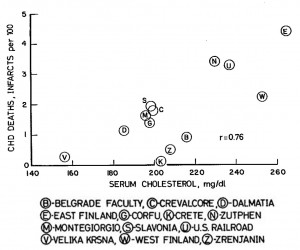 Ecological or cross-cultural associations are frequently viewed as the lowest level of evidence about causality. However, to demean ecological associations is to fail to recognize the powerful indication they provide about the population burden of disease – and thus the potential for prevention – when correlations among populations are congruent with sound clinical evidence, with significant correlations at the level of individuals within populations, and with known mechanisms.

In the SCS, the average population intake of saturated fat was based on chemical analysis of duplicate portions of foods consumed as collected from sampled families, while serum cholesterol data were collected at baseline and CHD incidence verified prospectively. The differences in average serum cholesterol level among the seven countries cohorts could in large part be ascribed to differences in average saturated fat intake and were in accord with results of controlled dietary experiments.

With hundreds of peer-reviewed publications, the Seven Countries Study generated an incredible amount of information. The main topic of interest was cardiovascular disease, which was expanded with research into healthy aging after 1984. We’ve selected 82 main results and summarized them for you in our articles.

Explore the graphs with trends in CVD risk factors, coronary and all-cause mortality across time and cultures.