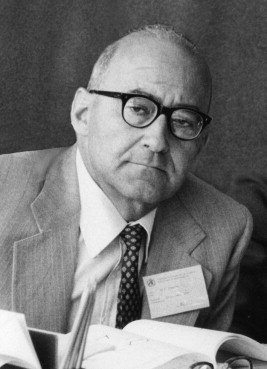 Flaminio Fidanza (1920-2012) was the first Principal Investigator for the Seven Countries Study in Italy and was involved from the earliest informal surveys of coronary disease risk with pioneers Ancel Keys and Paul White. He selected the town and led the pilot study of the Seven Countries Study protocol, instruments, and methods held in Nicotera, Calabria in fall 1957.

Fidanza obtained his M.D. from the University of Naples in 1945. Apart from a period of study as Rockefeller fellow at the Laboratory of Physiological Hygiene in Minnesota, he stayed connected to Italian academic life, closing his career as full Professor and Director of the Institute of Nutrition and Food Science of the University of Perugia in from 1965 until his death in 2012.

Fidanza was the first major Italian collaborator of Ancel Keys, having met in Naples during Keys’ 1951-52 sabbatical. Through Fidanza’s contacts, clerical workers and executives of Italian banks and industries were effectively recruited to carry out the early informal population comparisons relating diet to blood lipid levels.

It may also have been Fidanza’s persistence about the importance of individual differences in blood lipid responses to diet that encouraged Keys’ pioneer explorations of the intrinsic level of blood cholesterol and the variability of individual responses to a given dietary change.

It was surely his acquaintance with foods, people, and places in Italy that principally determined the choice of Italian villages in which to test the dietary hypotheses.