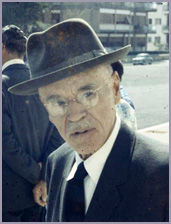 Paul White (1886 – 1973) of Boston was a pioneering cardiologist and a founding member of the American Heart Association. He played a central role in the development of cardiovascular epidemiology from its formal beginnings, and even into the Seven Countries Study.

White graduated from the Roxbury Latin School in 1903 and from Harvard Medical School in 1911. He is credited with the popular use of the electrocardiogram in Boston and other US centers. His contribution to electrophysiology was formalized in naming the Wolf-Parkinson-White syndrome, an uncontrolled heartbeat.

Ancel Keys first started informal explorations that led to the formal Seven Countries Study in 1952 with a small study among Naples workers, which he extended to Madrid and Sardinia. Keys called a 1954 meeting in Naples of international experts to lay more formal plans, and for the first time invited the world’s foremost cardiologist, Paul Dudley White who was slated to chair the 1954 world congress of cardiology, and to care for president Eisenhower during his heart attack in 1955. Thereafter he joined Ancel Keys in informal visits worldwide, surveying the coronary heart disease problem. White and Keys opened doors of cardiology to prevention around the world.

White’s lifelong themes revolved around lifestyle, physical activity, prevention, and medicine: “A vigorous five-mile walk will do more good for an unhappy but otherwise healthy adult than all the medicine and psychology in the world.