What did we measure? 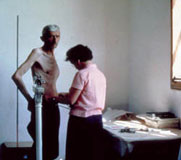 Fieldwork in the 1950s and 1960s was a challenge: community leaders had to be persuaded of the value of the study, have access to the census, and be able to engender the community response required to recruit the cohort; equipment had to be transported to remote villages; and the work schedule had to be carefully coordinated with the seasonal and daily activities of the community. The following types of information were acquired with the verbal consent of participants:

The examination of each participant included the collection of information on:

The following physical measurements were done:

Extensive diet information was collected at baseline in subsamples of generally 20 to 50 men in all 16 cohorts. Duplicates of the amounts of foods as eaten at home during a week were weighed, prepared for shipping for central laboratory chemical analysis of fatty acids, nitrogen, and ash. See also cross-cultural correlations.

A great effort was made to standardize questionnaires on demographic and lifestyle factors, anthropometric, biochemical and biophysical measurements, and clinical diagnoses. Almost all principal investigators have been trained at the Laboratory of Physiological Hygiëne of the University of Minnesota. Moreover, two members of the central staff (Henry Blackburn and Alessandro Menotti) taught local collaborators before the start of each field examination and supervised the operations on the spot. Whenever possible procedures were centralized such as coding of questionnaires, measuring blood pressure and serum cholesterol, reading spirometric charts and ECGs, assessing diagnostic conclusions of prevalent and incident diseases and coding causes of death.

Systematic monitoring of non-fatal cardiovascular events took place during the first 10 years of follow-up with periodic collection of interim information on illness and death. Mortality data collection continued in all cohorts for a minimum of 25 years. Cardiovascular risk factors were also re-examined by repeat surveys of survivors in 9 European cohorts after 25, 30, 35 and 40 years follow-up. The collection of mortality data of the 16 cohorts continued up to 25 years for 3 cohorts, 45 years for another 3 cohorts and for 10 cohorts until the 50 year anniversary of the Seven Countries Study.

For an overview of the follow-up surveys for each cohort, click on the image below. 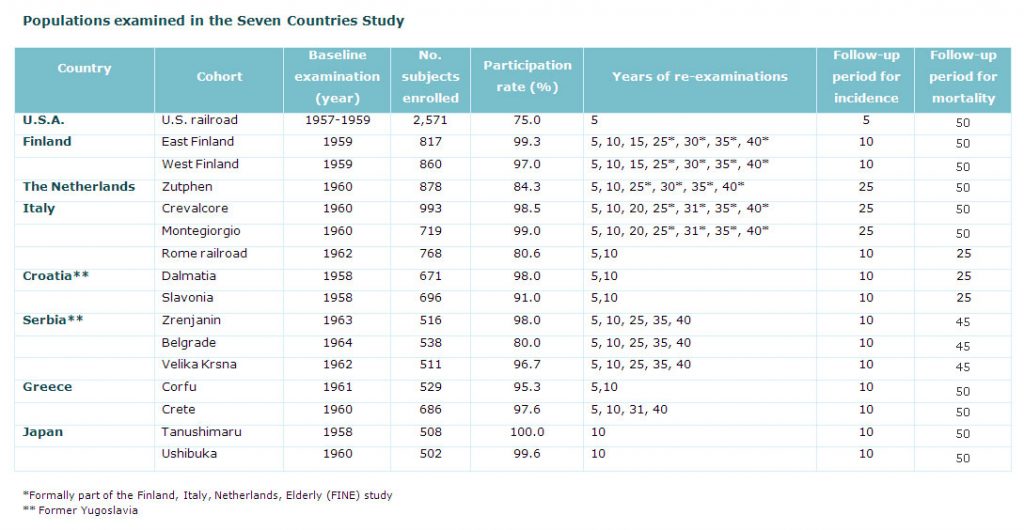