In the 1960s the average population intake of saturated (S), and trans fats (T) and hard fats (butter, lard, and hard margarine) was high in northern Europe while monounsaturated (M), polyunsaturated (P) fatty acids, and vegetable oils (mostly olive oil) were high in Mediterranean areas and total fat was low in Japan. The all-cause mortality rate was lowest in rural Crete and highest in rural East Finland.

The 50-year all-cause mortality rates were correlated (R= -0.68 to -0.77) ecologically inversely with the ratios M/S, (M+P)/(S+T), and hard fats/vegetable oils. The strongest correlation (R=-0.82) of the observed and predicted death rates was a function of the (M+P)/(S+T) ratio. The (M+P)/(S+T) ratio reflects the degree of resemblance to a classic “Mediterranean Diet.” 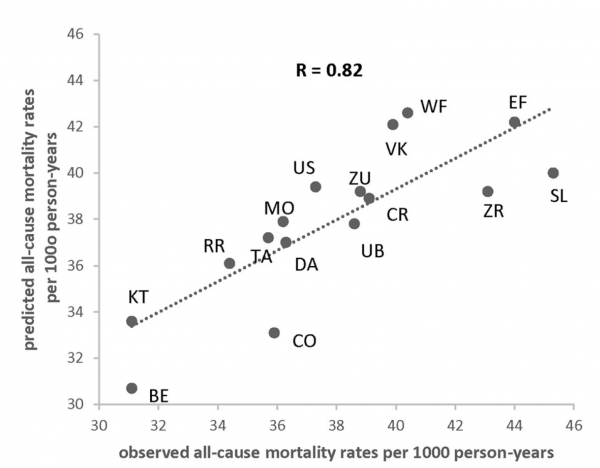