Major risk factors were measured at entry and five times during 35 years. Smoking decreased over time and systolic blood pressure increased except for the East Finland cohort. A decrease of serum cholesterol occurred in Finland and in The Netherlands whereas serum cholesterol increased slightly in Italy, and large in Serbia and Greece. A comprehensive Risk Factor Change Score showed slight declines over 35 years in Finland and The Netherlands, a moderate increase in Italy and large increase in Serbia and Greece. Spontaneous long-term changes of major coronary risk factor levels were associated with changes in the same direction of coronary heart disease mortality. This finding in these ‘natural experiments’ match those obtained with preventive trials. 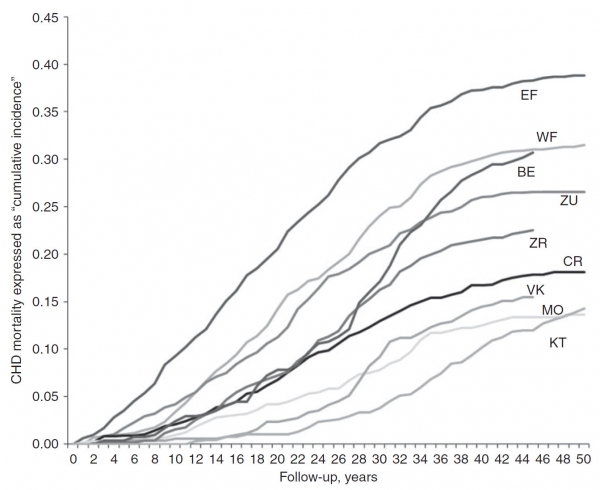 From nine cohorts middle-aged men were examined in five European countries of the Seven Countries Study: two in Finland, one in the Netherlands, two in Italy, one in Greece and three in Serbia. Smoking habits, systolic blood pressure, and serum cholesterol were measured during 35 years of follow-up and a comprehensive Risk Factor Change Score was created. Coronary heart disease mortality data were collected at regular intervals for 50 years.