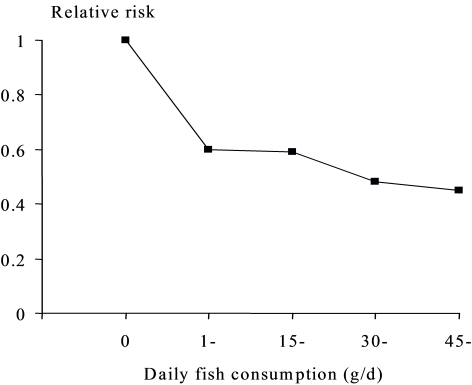 The Finnish, Dutch and Italian cohorts showed that men eating fatty fish (e.g. mackerel and herring) had a 34% lower 20-year CHD mortality risk compared to those eating no fish. The consumption of lean fish, such as plaice and cod, had no comparable association with lower CHD risk. Analysis of the dietary data repeatedly collected between 1960 and 2000 in the Zutphen Study also showed that eating fatty fish but not lean fish was inversely associated with long-term risk of sudden coronary death.

Changes in body weight during 10 years of follow-up were related to 15-year CHD mortality.