Poor lung function is a risk factor of cognitive impairment, depression and suicide

In the European cohorts of the Seven Countries Study poor lung function in middle age was related to a higher risk of cognitive impairment, depressive symptoms and completed suicide in late life. An interaction was observed for APOE4 genotypes. Lung function was positively associated with cognitive function in APOE4 non-carriers but not in carriers. 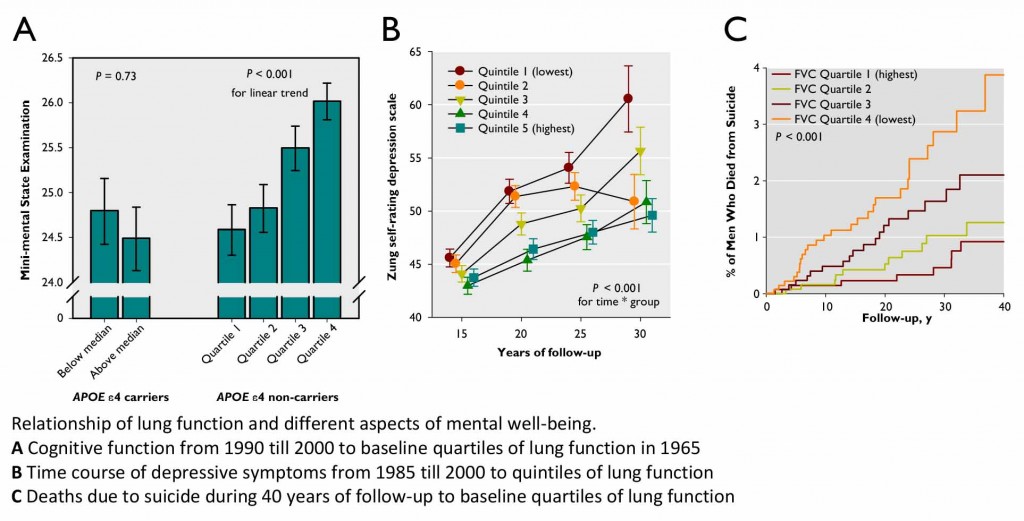 Chronic obstructive pulmonary disease (COPD) is associated with a higher risk of dementia, depression, and completed suicide. Poor lung function is a major risk factor of COPD and is associated with a reduced surface available for gas exchange and may increase the chance for shortness of breath. The brain has the highest oxygen demand of any organ and is highly sensitive to ischemic damage. Our findings suggest that poor lung function may induce a more rapid decline in cognitive function, emotional dysregulation, and suicidality. Alternatively, poor lung function could also indirectly be related to these adverse outcomes because of underdevelopment of the lungs.

High optimism low CVD mortality Optimism was a relatively stable trait over 15 years in the Zutphen Elderly Study. Elderly men with a high [...]

There is some evidence that classic cardiovascular risk factors measured in middle-age are related to disability and mental well-being in later life.